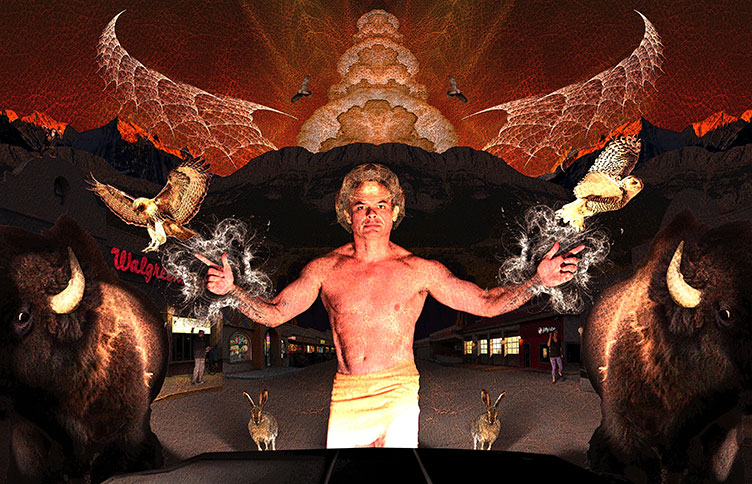 Luke Comer is an independent producer, director, and writer who owns his own projects and works in various mediums. He is the director and lead author of The First Supper, the series of books about the relationship between human evolution and food; the executive producer and co-producer of the Colorado festival, Arise, which features music, art, ritual, and healing; the executive producer and creative director of The Portal, the show about one man’s quest for empowerment and revelation in the desert; and the author of Yoke of Wind, a novel about a slave revolt on an island off the coast of Florida. He also occasionally produces the small, local trance dance called Ride the Dragon. He does much of the design and illustration for his own projects, including all of the images on this website and the self-portrait above. He is one of the original investors in Meow Wolf and Electric Playhouse.

For decades he studied human biological and cultural evolution in various forms relating to food, psychology, sociobiology, art, and shamanism. Through these studies he strives to identify the fundamental and biological needs of humans that are not met in modern society—and then devises ways of fulfilling those needs. His various works range from strict, scientific reductionism to imaginative, spiritual explorations.

He was born and raised in small towns in Alabama, the scion of two families that operated large corporations but he was mostly interested in drumming for his rock band, Chopped Liver, drawing pictures, and reading books about philosophy—and even more interested in exploring the woods and coastlines around his home. Later he clashed with prep school and, after being threatened with expulsion, traveled through Asia in search of enlightenment and adventure. He then attended Oberlin College to study broadly in the liberal arts. After graduation he ran therapeutic, wilderness courses for adjudicated, inner-city teenagers; then worked for one of his family’s companies; and then opened the innovative, natural foods restaurant called Native, in Boulder, CO. In his late twenties, he went through a psychological, spiritual, and physical crisis and dropped out of work for two years to pursue various modalities of healing including psychotherapy, psychedelics, meditation, and nutrition while taking long trips into the wilderness. He then committed himself to creating the content listed above.

He is currently developing another project related to The First Supper, momentarily entitled The Ultimate Meal, which provides whole natural meals that are nutritionally designed to optimize human physiology.

In his spare time, Luke has pursued outdoor sports both in the mountains and on the oceans. He loves to dance to electronic music.